We are Greenwood Campbell
21 December 2020 by Gemma Bianchi

The landscape for dating has changed dramatically since our grandparents. In 1950 you’d have been married by age 20 to a husband or wife you met through your friends or family. Since 2017, the most common way to meet your future husband or wife is online. 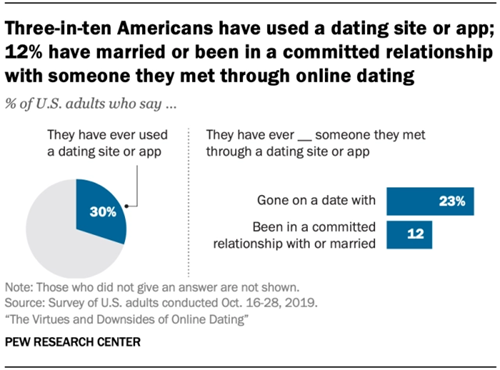 That’s not just through specific dating apps like tinder or match.com either, it’s also through using social media like Instagram and Facebook. Courtship is well and truly a thing of the past with those who are single preferring to start casually & ‘see where it goes’.

Whilst Match came out in 1994, it wasn’t until online dating came to our smartphones in 2012 that the new trend really took off and became a streamlined part of singleton society.

We don’t like to bring up the C word so soon, however Covid has forced so many changes in our lives and dating is no exception. Typically on dating apps, individuals match with one another and then after a week or so of messaging, arrange to meet up for their first real date. Not in 2020. With self-isolating and social distancing in full swing for a large proportion of the year, dating apps have had to think of new ways to keep their users' love life alive. Introducing video dating.

Humans are physical beings that crave connection.. How far can virtual dating go?

A recent survey from Match.com showed that 69% of users were receptive to video dating with a potential partner. Bumble, the first major player to launch a video tool in 2019, has seen a major increase in usage of its feature, which it says is a safer way to video chat as opposed to swapping phone numbers or social media handles. Hinge added a ‘Date from Home’ video chat function in April.

Bumble, Priti Joshi, Vice President of Strategy and Operations shared that there was an 84% increase in video calls between users and what they are hearing from them is that it’s “a way for them to connect safely because they can’t connect IRL”.

We created our own small survey on LinkedIn and was surprised that less people we’re up for video dating. Although it was close.

Before the pandemic, there was a lot of scepticism around video dating. If anything, it has proved to single people that you CAN in fact get to know someone incredibly well through digital dating and video calls. Although over time, it’s no replacement for in-person contact. There is a consensus that the trend for video dating won’t disappear completely, with many suggesting that video calls in the ‘new normal’ will form part of a screening process before a first real-life date.

It's a lot easier to have a video call with someone to work out that you really do connect with them than it is to go and waste two hours of your time in a bar. A survey by Tinder showed that 40% of generation Z users said they wanted to continue using video as a way to decide whether or not to meet in real life, even once their favourite dating spots opened up again.

This isn’t going to completely overhaul the dating experience but it is shifting our ideas about which parts of the dating process can happen online and which parts can’t. Our eyes have been opened to the benefit and convenience of video calling for all types of industries from doctors appointments to business meetings and socialising with friends and family. Dating is part of that.

15 million singles in the UK are registered for online dating.

Members of dating services who share photos of themselves laughing have over 3 times more chances of communicating with other members.

It is estimated that the industry is worth more than £2bn globally. In the UK, it is worth £300m a year, according to the UK’s Online Dating Association (ODA)

No-code (and low-code) platforms. What are they and why should you care?

Death is no longer the end... The digital afterlife.