We are Greenwood Campbell
08 January 2021 by Adam Greenwood

For years, social media platform algorithms have been showing people more and more extreme content to keep them watching. It's not just adverts that we are consuming at an alarming rate. It's dangerous, radical and extreme content and it is having an effect on us and our behaviour in the real world.

“If you are not paying for it, you’re not the customer; you’re the product being sold.” Tim O’Reilly

As well as advertised adverts / advertisements being served to social ‘users’ each platform uses an algorithmic recommendation engine to display what it ‘thinks’ the user wants to view. The logic / AI  /rules used to make these recommendations is not made available to the public.

YouTube engineers describe theirs as one of the “largest scale and most sophisticated industrial recommendation systems in existence”.

Slot machines are designed to keep players playing, in her book, ADDICTION BY DESIGN: Machine Gambling in Las Vegas Natasha Schull, identifies something she calls the ludic loop which is the techniques used by slot machines to keep us playing:

Youtube is very similar to this, smartphones by their very design encourage solitude and for anyone who has gone down a ‘youtube rabbithole’ you will know that the content keeps on coming and there is absolutely no end to it.

So, if it is part of the intrinsic design of youtube to keep people on screen watching so they can make more revenue, what’s the best way to keep people engaged?

People like to walk off the beaten track, they have a natural tendency to explore, to research, to find that unheard acoustic track by their favourite artist or the unseen movie by a famous actress. It is the same when they are online, forever clicking and searching and discovering.

Zeynep Tufekci, a techno-sociologist and presenter of the TED talk, We’re building a dystopia just to make people click on ads says that “YouTube’s recommendation engine is a bit like an autopilot cafeteria in a school that has figured out children have sweet teeth, and also like fatty and salty foods, once that gets normalised, however, what is fractionally more edgy or bizarre becomes novel and interesting. So the food gets higher and higher in sugar, fat and salt – natural human cravings – while the videos recommended and auto-played by YouTube get more and more bizarre or hateful.” 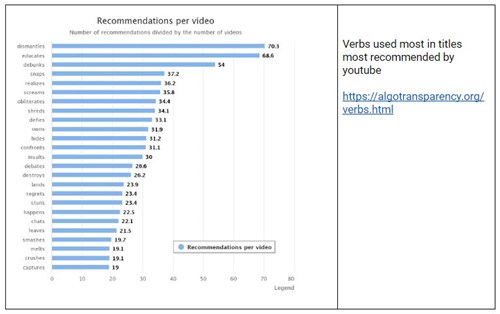 Aglotransparency.org is an experiment set up by ex Youtube employee Guillaume Chaslot to understand what videos YouTube’s algorithm recommends.

As you can see from the diagram above, almost every verb used in recommendations is negative; “dismantles”, “destroys”, “obliterates”, “crushes”. YouTube pushes angry, hateful content because it keeps users where they want them - on their devices, consuming content and adverts.

“There are only two industries that refer to their customers as 'users': illegal drugs and software. " — Edward Tufte

Effects in the real world

In the Philippines, Facebook is the internet. It comes pre-loaded on every smartphone sold and data access to the site is completely free.

There are 100M people in the Philippines and the average time spent online daily by Filipinos is 10 hours and 2 minutes, the highest in the world. There is no ‘better’ dataset of people to use to understand social media’s influence on their behaviour. 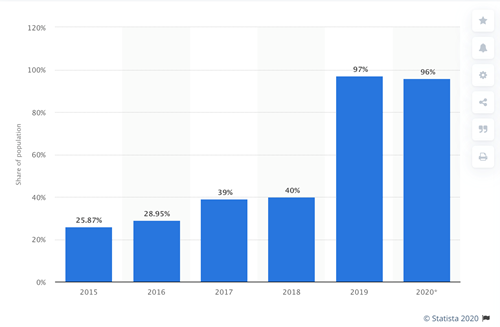 Rodrigo Duterte, President of the Philippines, oft-called “The King of Facebook conversations” has been accused of using Facebook to attack his critics, including Senator Leila de Lima. After a series of fake news stories repeatedly shared across Facebook, De Lima was arrested on drug charges, and is now in prison.

In Myanmar, Buddhist groups use Facebook to spread vicious lies about the Muslim Rohingya people. In 2018, Reuters launched an investigation on the violence that this content insites. More than 700,000 Rohingya have been forced to flee their homes and many have been tortured and killed. During internet blackouts, levels of violence drop.

In the last few years, fake news and radical content by the ‘anti-vaxx’ movement has caused more people not to vaccinate their children. Measles and mumps have seen a resurgence in the USA, Philippines, Ukraine, Venezuela, Brazil, Italy, France, and Japan.

What can we do about it?

Awareness is always the first step. The more people that are aware of the potential dangers of unchecked, radical content the less likely that its effects can propagate.

Make sure that you fact-check content before sharing it, try not to watch recommended videos on YouTube and whatever you do, avoid the rabbithole!

No-code (and low-code) platforms. What are they and why should you care?