We are Greenwood Campbell
13 December 2019 by Megan Wellman

Brands love to innovate, but find themselves constantly asking agencies for examples of where it has been done before, or which of your competitors are already doing it.

Innovation is to try something that nobody has attempted before.

Johnnie Walker Whiskey, NBA, Hermes and many more have proven the returns of innovation. Whether that’s building a chatbot to provide a smoother service, or creating a Voice skill to complete tasks more efficiently, there is always scope for brands to push the envelope.

Being the first to implement emerging technologies in your industry can seem scary. How do you know it’s going to work? What do you do if you don’t have any specialists within your company that can give you their expert opinion on whether it will pay off?

Firstly, you should never innovate for innovation’s sake, you shouldn’t shoe-horn technology into your business just to be the first to do so. What you should do is find a problem that you can solve or a life that you can enhance with tech. The greatest thing is that if it doesn’t work, hey! What’s the problem!? You spend a little money and a bit of time. In this scenario, the opposite of love isn’t hate... it’s indifference.

People won’t hate your brand because you tried to do something different. 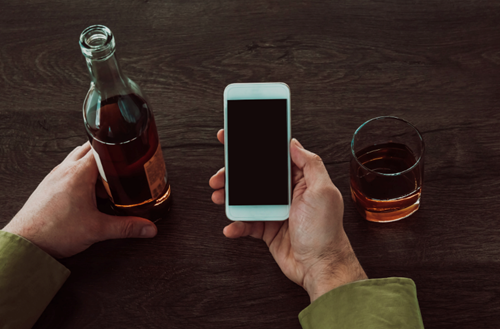 Johnnie Walker Whiskey has created an Alexa Skill and has launched a Facebook Messenger bot. There are multiple options such as finding the perfect scotch blend for yourself or a friend, trying a guided tasting, giving you instructions random facts about Jonnie Walker whiskey, and locating the nearest store or having a bottle delivered to you.

Sales of Irish whiskey in 2018 jumped 9.4% compared to a year before, bringing distillers about $1 billion in revenue, according to CNBC.

The NBA have partnered with Magic Leap, which means Basketball fans can now experience the game in Augmented Reality, and in real time. Fans with the mixed-reality headset can now view live NBA games, game replays, and highlights across multiple virtual “screens.”

A new Facebook Messenger chatbot integration with Fandango will detect when the conversation of U.S. users turns toward movies and will offer movie times and the option to buy tickets. Fandango also partnered with Google to let consumers buy movie tickets with voice commands using Google Assistant. Movie goers can order tickets for more than 30,000 screens nationwide using the Fandango Action, without needing to download Fandango’s separate mobile app.

"We’ve built ticketing innovations for a wide variety of mobile, social, AI bot and voice-activated platforms, so we can super-serve movie goers at scale, wherever and whenever they are thinking about and planning a trip to the movies." - Paul Yanover, Fandango President

The idea of digital transformation at Lancaster University was just beginning to gain traction, and the university reacted swiftly by developing its own digital strategy, called Digital Lancaster. The IT and innovation teams worked together to see how voice technology could help students find out the answers to complete tasks more efficiently.

Hermes UK recently announced the next phase of its Digital Futures Strategy. Key initiatives that will be rolled out this year include: the ability to divert a parcel to a ParcelShop, a locker or another address right up to the time of delivery in addition to the current options of a safe place or neighbour; the introduction of instant real time notifications about issues such as traffic delays and address queries; and trials for in car delivery. A new ‘My Place’ service will enable customers to upload a photo of where they want their parcel delivered to and pin it to a map.

Hermes UK is also introducing innovative technology aimed at bringing people together by enabling the sender of a parcel to connect with its recipient through a personal video message.

Hermes Play, which was created within Hermes’ Innovation Lab, enables the sender to pre-record a personal message which is then uploaded via the Hermes Send app. A 2D barcode (similar to a QR code) is then created which is added to the parcel label. The parcel recipient is then invited to scan the code and watch the video message on their phone or tablet. The video uses augmented reality to bring the parcel to life so that the video plays on top of the parcel itself. All videos will be saved for 30 days and can be downloaded and shared on social media.

"Our Digital Futures Strategy is designed to support the company’s mission to become the UK’s carrier of choice by 2021 and builds on our continuing development, which has seen double digit growth for the past six years. It will deliver true value to our retail customers and further enhance the delivery experience for everyone." - Martijn de Lange, CEO

Starbucks is launching a “conversational ordering system” dubbed ‘My Starbucks Barista’ that will be powered by Artificial Intelligence. The coffee brand says the new My Starbucks Barista system will deliver “unparalleled speed and convenience” and enhance customer loyalty and engagement.

Starbucks Mobile App customers will be able to place their orders via voice command or a messaging interface, delivering unparalleled speed and convenience, enhancing customer loyalty and engagement and further extending the accessibility of the Starbucks app.

It’s the latest effort by the company to use technology to change the way customers interact with Starbucks via their phone. The company says it has 12 million Starbucks Reward members, up 18 percent from last year, plus 8 million mobile paying customers, with a third using its Mobile Order & Pay technology which lets customers place an order via smart phones and pick it up without waiting in line.

If you think these technologies are still in their infancy, or that it’s too much of a risk to think about implementing them, you just need to take a look at the above stories. Innovation is not too forward thinking. If you don’t do it now, you will be left behind.

If you want to be an industry leader, being the first company to consider Voice Search Optimisation in your next marketing budget, creating your own customised voice action, or creating a chatbot to engage more with your audience.