We are Greenwood Campbell
21 May 2020 by Gemma Bianchi

Progressive Web Apps - what are they and why do you need one?

Progressive Web Apps (PWAs) are on the rise, and rightly so. In short, a PWA is an application that looks and feels like a website on desktop and laptop but acts like an app on your mobile or tablet, without the need for pre-launch app store approvals or downloading from your users.

The biggest advantage of a PWA is ease of development which has a direct impact on time and budget. You no longer need to develop a website, an android app and an iOS version which all come with time and resource costs. You can do it in one, creating a seamless, responsive experience across all three.

But not only that..

Responsiveness - PWA's are responsive to any and every device. Desktops, tablets, mobiles and any other device that is yet to come

Offline connectivity - Progressive Web Apps offer something that both native apps and websites cannot. The ability to load the entire page / application without requiring an internet connection

Future proof - PWAs can be built to allow future enhancements and upgrades. Updates can be automated on app load, without your user having to do anything

Simple to access - No need to install anything from app stores

The ‘native app’ boom is over.

Want to know how many apps the average smartphone user downloads each month? Zero.

So, unless you’re as big as Instagram or as popular as Uber, breaking through the noise and getting users to commit to deleting something to free up enough space for your new app is going to be a challenge. Even the very biggest app publishers are seeing their growth slow down or stop altogether. Most people have all the apps they want and/or need and they're not looking for new ones.

How many ways can you order a pizza?

Gartner predicted that 2021 is the year for ‘Multi Experience’. Multi Experience is about adapting to the increasing market of different devices and their respective experiences. Applications now need to run on different platforms and adapt easily, all while providing a consistent experience from a business perspective. A good example of a successful Multi Experience strategy comes from Domino's Pizza. Customers can order pizza in 15 different ways from their chosen device, using whatever interaction modality is most convenient - voice on google home and Facebook Messenger, text, smart TV, you name it.

Pinterest rebuilt their mobile web experience using React, Redux and webpack leading to several positive improvements in core business metrics. It took them 3 months to build and it resulted in time spent on the mobile site going up by 40% compared to the old mobile web experience. User-generated ad revenue went up by 44% and core engagements up by 60%. Even better, page load speed was reduced from 23s to 5.6s.

Forbes redesigned their mobile website as a PWA which resulted in load-time reducing from 12 seconds to now 0.8 seconds. Users now spend more time on the site as a result (43% increase), more ad views (20% increase) and more content engagement from readers (increase of 100%). 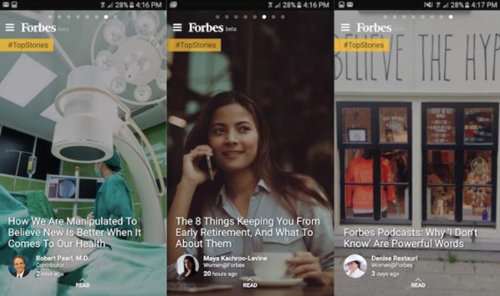 The Starbucks PWA allows their customers to browse the menu, customize their orders, and add items to their carts – all without consistent access to the internet. By launching the new ordering PWA, Starbucks has already seen significant results. The PWA is 99.84% smaller than their existing iOS app, making the web app a favorite amongst its users. As a result, they doubled the number of web users who place orders each day, with desktop users now ordering at about the same rate as mobile users.

With Tinder's new PWA, which is 90% smaller than the native app, they saw the load time decrease from 11.91 seconds to 4.69 seconds and user engagement has increased significantly. The MVP for the PWA took 3 months to implement using React as their UI library and Redux for state management. The result of their efforts is a PWA that delivers the core Tinder experience in 10% of the data-investment costs

Progressive Web Apps combine the best and newest features of the Web to deliver an experience that rivals both native applications on mobile and the traditional website.