We are Greenwood Campbell
08 January 2021 by Gemma Bianchi

With an answer to almost anything ‘one click’ or ‘hey google’ away, are we forgetting how to retain information, treating developments in digital like an extension to our own memory?

Not so long ago, if you didn’t know how to spell a word you would look it up and find a way to remember it. Tactics like ‘i before e’ or breaking the word into 3 chunks. Now, whether you're using ‘notes’ on a laptop, writing a whatsapp on an android phone or using google docs to write a letter, built in spell checkers mean you never actually have to know how to spell anything. Most of the time, the software will correct the word without you even knowing.

A more recent advance to the spell checker, launched by google in 2018 on the gmail platform, is ‘Smart-Compose’ which lets you use autocomplete suggestions as you start a sentence to write your emails faster.

A study by The Kaspersky Lab suggests 90% of people are suffering from digital amnesia. More than 45% of us don't know our significant others' contact number. 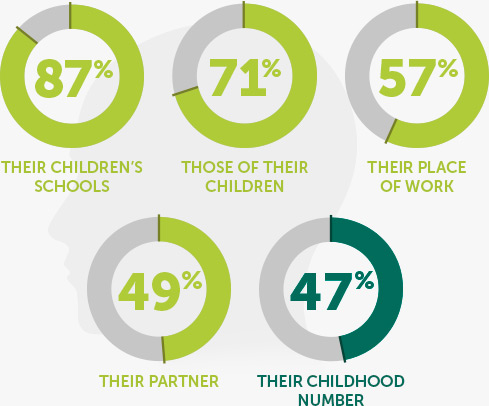 The report continues by saying we don't commit data to memory because of the “Google Effect" & that devices are being used as digital brains, to store information people need to remember. We’re better at remembering where to go to look up information than we are at remembering the information itself.

Two thirds of people use digital calendars to remember future plans, birthdays and anniversaries - rather than their memory. 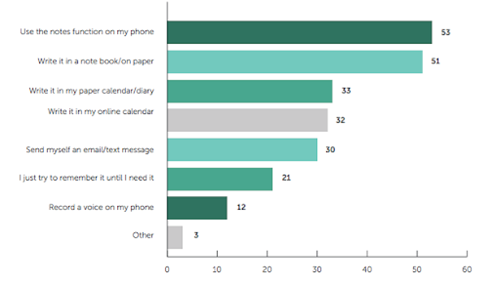 This even extends to photographs. A Fairfield University study in 2003 found that taking photos reduces our memories. Participants were asked to look around a museum, and those who took photos of each object remembered fewer objects and details about them than those who simply observed.

Back in 1995, the first SavNav was released in the United States, although it didn’t become ‘mainstream’ until about 2002. In a paper co-authored by University College London neuroscientist Sam Gilbert, Dr Risko reviewed studies into ‘cognitive offloading’ – or using the outside world to save on brain power. These include studies on SatNav use, which found that while they helped motorists on their journey, they affected memory.

Astonishingly, almost half of all motorists admit they would abandon their journey if their SatNav broke. Even worse, there have been several reports of people driving their cars right into rivers, because their ‘SatNav’ said so, like this guy for example - http://bit.ly/2XY8ygW. In fact, satnav guided directions have formed part of the UK driving test since 2017.

Nicholas Carr, author of The Shallows: How the Internet is Changing the Way We Think, Read and Remember and The Glass Cage: Where Automation is Taking Us, believes we should be alarmed. He believes our brains are not like hard drives, or refrigerators that can get overstuffed so there's no more room. In contrast, he says they expand: "It's not as if remembering and thinking are separate processes. The more things you remember, the more material you have to work on, the more interesting your thoughts are likely to be,"

With 80% of people more reliant on their digital devices now for accessing information than five years ago, what functionality will the human brain have in another 5 years? Should we be more concerned about illness such as dementia? Will we cease to bring up a modern day Alan Turing that can make the world a better place?

There’s lots of evidence showing that the information you learn on a digital device, doesn’t get retained very well and isn’t transferred across to the real world. You’re also quickly conditioned to attend to lots of attention-grabbing signals, beeps and buzzes, so you jump from one task to the other and you don’t concentrate.

Not only do smartphones affect our memory and our concentration, research shows they are addictive – to the point where they could be a ‘gateway drug’ making users more vulnerable to other addictions.

Our brains can only process so much information at a time, about 60 bits per second.

The more tasks we have to do, the more we have to choose how we want to use our precious brain power. So it's understandable that we might want to pass some of our extra workload to our phones or digital assistants.

But there is some evidence that delegating thinking tasks to our devices could not only be making our brains sicker, but lazier too.

There’s around 30 years of research showing that people who read something on a screen will retain 10 to 30% less of the material compared to reading the same on paper. Researchers have also shown that people who take in complex information from a book, instead of on a screen, develop deeper comprehension, and engage in more conceptual thinking, too.

As a result of the algorithms and preferences built into our devices, our individual news and social media feeds can become echo chambers – basically reaffirming everyone's worldview over and over, most worryingly perhaps even at the expense of objective truth.

An example that was put forward by the tech experts in The Social Dilemma was the flat-earth theory. Anyone that had previously shown an interest in conspiracy theory videos, or might have indicated that they would be more open to engaging in such content, would be more likely to be served something relating to flat-earthers. What I take from this is that no matter how absurd something may sound, if there is enough noise about it online, people will question their own intelligence and start to believe it.

If we don’t debate & discuss with people that share a different view, how can we be empathetic? Or inclusive?  How can we move toward a better, less divisive future? What will the world look like if we continue consuming and posting content that only validates our point of view?

From invention to having 3.3 billion smartphones operating worldwide in just over a decade, the smartphone revolution has been phenomenal but the profound effects on our brains and their function are already emerging.

Endocrinologist Robert Lustig told Business Insider that “notifications from our phones are training our brains to be in a near constant state of stress and fear by establishing a stress-fear memory pathway. And such a state means that the prefrontal cortex, the part of our brains that normally deals with some of our highest-order cognitive functioning, goes completely haywire, and basically shuts down”.

What can we do?

It’s not all doom and gloom. “Research highlights how digital technology is fusing synergistically with the human mind to create an ‘augmented self’. As we progressively offload basic psychological functions to digital technology, we are liberating our minds to focus on what truly matters; love, happiness and wisdom” says Dr Marsden.

There are also measures we can take to protect the memories and information that we so willingly outsource to our digital devices:

Don’t allow your cognitive ability to be hindered by over reliance on technology. The ability to learn, memorise and be creative is vital to humanity. Afterall, who knows if we’ll have the internet forever?

Social media can be a good thing